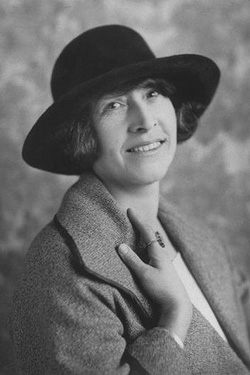 Artist and author, the daughter of H. W. Gibbs of Sussex, England, and Celia nee Rogers. She was about four when she arrived in South Australia with her parents in 1881. The family moved to Western Australia and settled near Bunbury in August 1885. She was initially educated by a governess at the family home at Harvey River, then at private girl's schools in, Perth, and later studied at art and technical schools in England.

The Gumnut Babies, her first book about Australian bush fairies, was published in 1916 in Sydney. Apart from the famous Snugglepot and Cuddlepie (1918), her publications include Flower Babies, Wattleblossom Babies, and other Gumnut fairytale books. Her "Bib and Bub" comic strip series ran for years in Sydney newspapers.

Her deep love and understanding of the Australian bush was portrayed by her animated images in conflict with fellow bush creatures and the environment. A retiring personality who shunned publicity, May Gibbs, through her books, aimed to engender in children her own love of nature. She was appointed MBE for her services to Australian literature, and the Commonwealth Literary Fund awarded her a pension. She married B. J. Ossoli Kelly. Childless, she willed her house and contents to be auctioned for the benefit of UNICEF.